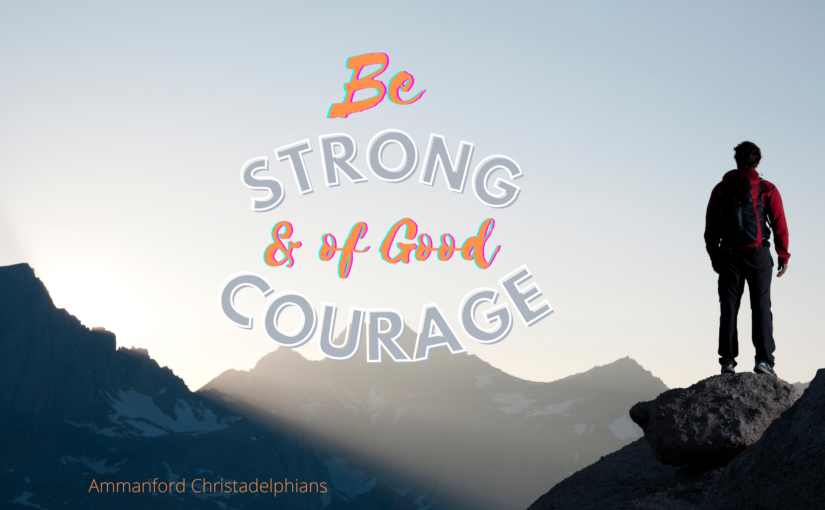 We are all afraid at times, it is a fact of human experience. But we should not to be ashamed when it occurs, because we all have fears, worries, concerns, which change as we pass through life. Some of our fears are “private”, known only to oneself, and some are evident for all to see.

As children we might fear the dark; being left alone by our parents; not being liked by other children; and a multitude of other small problems which appear as enormous in a child’s mind.

As we grow up there is the typical fear of not succeeding at school, and of having to “stand up and be counted” when we are resolved to stand against the permissiveness and evil of our present world.

The older we are, the more we fear increasing ill-health, the pain and suffering, trials and loneliness, or loss of independence, that might come with increasing age.

But God, who knows our weaknesses, gives us reassurance, if we align our lives with His, and seek to do His will, instead of being on our own, He says “… I will never leave you or forsake you.” Hebrews:13v5

Jesus was once asked by his disciples to forecast the events that would lead up to his return to the earth from heaven.

He foretold precisely what has happened in the intervening years since then, wars, famines, earthquakes and illnesses, would increase as things got progressively worse, ultimately Jesus said people would be terrified for the future.

“And there will be signs in the sun, in the moon, and in the stars; and on the earth distress of nations, with perplexity, the sea and the waves roaring; men’s hearts failing them from fear and the expectation of those things which are coming on the earth, for the powers of heaven will be shaken. Then they will see the Son of Man coming in a cloud with power and great glory. Now when these things begin to happen, look up and lift up your heads, because your redemption draws near.” Luke:21v25-28

How well those words describe the days in which we now live, giving assurance to Bible Students that Jesus’ return cannot be far away.

But notice also, how these two things are brought together in the passage above:

1. When people in general are distressed by the things that are coming, when they say among themselves “Whatever next?”

2. the believer need have no fear for the future.

Because, the believer who has prepared his or her life for what is coming next – the return of the Lord Jesus Christ to the earth – knows that Christ is coming to redeem and rescue those who are his, and to reward them with righteousness and immortality for faithful service, and an abiding place in God’s Kingdom that Jesus is to establish upon the earth.

No wonder then that Jesus bids them, “Look up and lift up your heads, because your redemption draws near.”

So when Jesus tells his faithful servants to, “Be not afraid” he gives them a positive message as well, to be firm and resolute in his service, because  whether they are alive or dead at his return, they are all assured of a reward for faithful service, as the words of 1 Thessalonians tell us, and they were to be comforted and edified by these words.

“For this we say unto you by the word of the Lord, that we which are alive and remain unto the coming of the Lord will by no means precede those who are asleep. For the Lord himself shall descend from heaven with a shout, with the voice of the archangel, and with the trumpet of God. And the dead in Christ shall rise first: Then we who are alive and remain shall be caught up together with them in the clouds to meet the Lord in the air. And thus we shall always be with the Lord. Wherefore comfort one another with these words …
For God did not appointed us to wrath, but to obtain salvation through our Lord Jesus Christ, who died for us, that whether we wake or sleep, we should live together with Him. Therefore comfort each other and edify one another, just as you also are doing.” 1 Thessalonians4:15-18; 5:9-11.