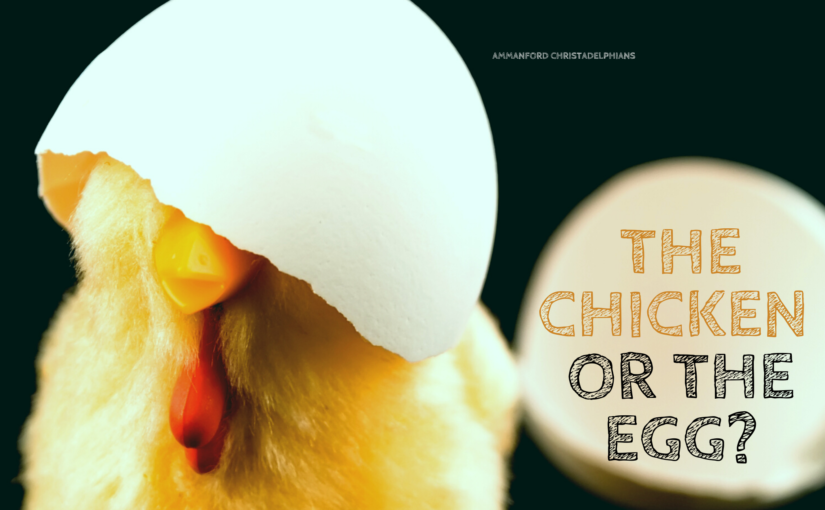 We are grateful to scientist who are able to teach us so many amazing facts about our wondrous planet and natural world.

Right at the beginning of The Bible we are told all about Creation.

Sadly some scientists have dismissed God’s Word and have replaced it with a theory, a story of gradual development over long periods of time. The idea of evolution is the product of human imagination and designed to “do away with God”

Every creature that God created has been endowed with amazing characteristics. Both the educated and uneducated marvel at the perfection of bodily shape, at their ability to survive in their particular environment. The way creatures function, has been perfectly designed to allow the creature to live and reproduce after its own kind.

Reproduction is, in itself amazing! When we consider the numerous and variety of ways that creatures reproduce it is truly amazing. Some creatures lay eggs, some bear live young, some are produced inside a special sac, to mention just a few examples.

Consider the egg of a domestic hen. It is made up of three parts, the outside shell, the yolk and the white which surrounds the yolk. The yolk in the middle is the food for the chick that forms from the white of the egg.

A brooding hen has to gently sit on its eggs to keep warm them. It rises from time to time to roll the eggs over to ensure that the eggs are evenly warmed for the period of incubation. Which is about twenty one days.

When the time comes for the chick to emerge from its shell the hatching process begins. The chick taps the shell using its egg tooth which has developed on the top of its beak to pip (chip or break) the shell, it continues to pip the shell until it has gone all the way around the shell. This process can take between twelve and eighteen hours. When it is ready the chick kicks off the egg shell and flops out wet and tired.

All this has been designed by God, the all wise Creator.

Did you know that not all bird eggs are the same shape? There is a distinct difference in shape of the eggs of ground nesting birds from those that nest in hollow trees or on top of trees.

Take for example the Canada Goose its eggs are elongated so that they do not blow away in windy conditions. If they move slightly their pointed end acts as a pivot.

When we consider the information and precision required in these examples of design, special, instantaneous, pre-programmed creation is the only satisfying answer to the amazing phenomena outlined.

What is the alternative? What are the chances that something of such precision could have happened at random? Who created the circumstances? Can we be absolutely certain that it was not created by a power that is infinitely more superior to anyone who has ever lived?

God’s Word, the Bible, tells us that God is the Creator of the universe and everything in it.

In the book of Isaiah we are asked to consider the Creator of heaven and earth, His wisdom and power which can be seen in the wonders of the world around us.

“Who hath measured the waters in the hollow of His hand, and measured heaven with the span, and calculated the dust of the earth in a measure? Weighed the mountains in scales and the hills in a balance? Who hath directed the Spirit of the LORD, or as His counsellor hath taught him? With whom took He counsel, and who instructed Him, and taught Him in the path of justice? Who taught him knowledge, and showed to him the way of understanding? To whom then will ye liken Me? or to Whom shall I be equal? says the Holy One. Lift up your eyes on high, and see who hath created these things, Who brings out the host by number: He calls them all by name, by the greatness of His might and the strength of His power; not one is missing”. Isaiah 40:12-14, 25-26

*Quotes are taken from the New King James Bible

To find out more about our hope and how you can become a part of it, visit our website: www.ammanfordchristadelphians.co.uk or our Facebook page.